Construction of the Governor Mario M. Cuomo Bridge began in 2013 and the bridge fully opened to traffic in 2018. At the time of its construction, it was the single largest bridge project in New York’s history. 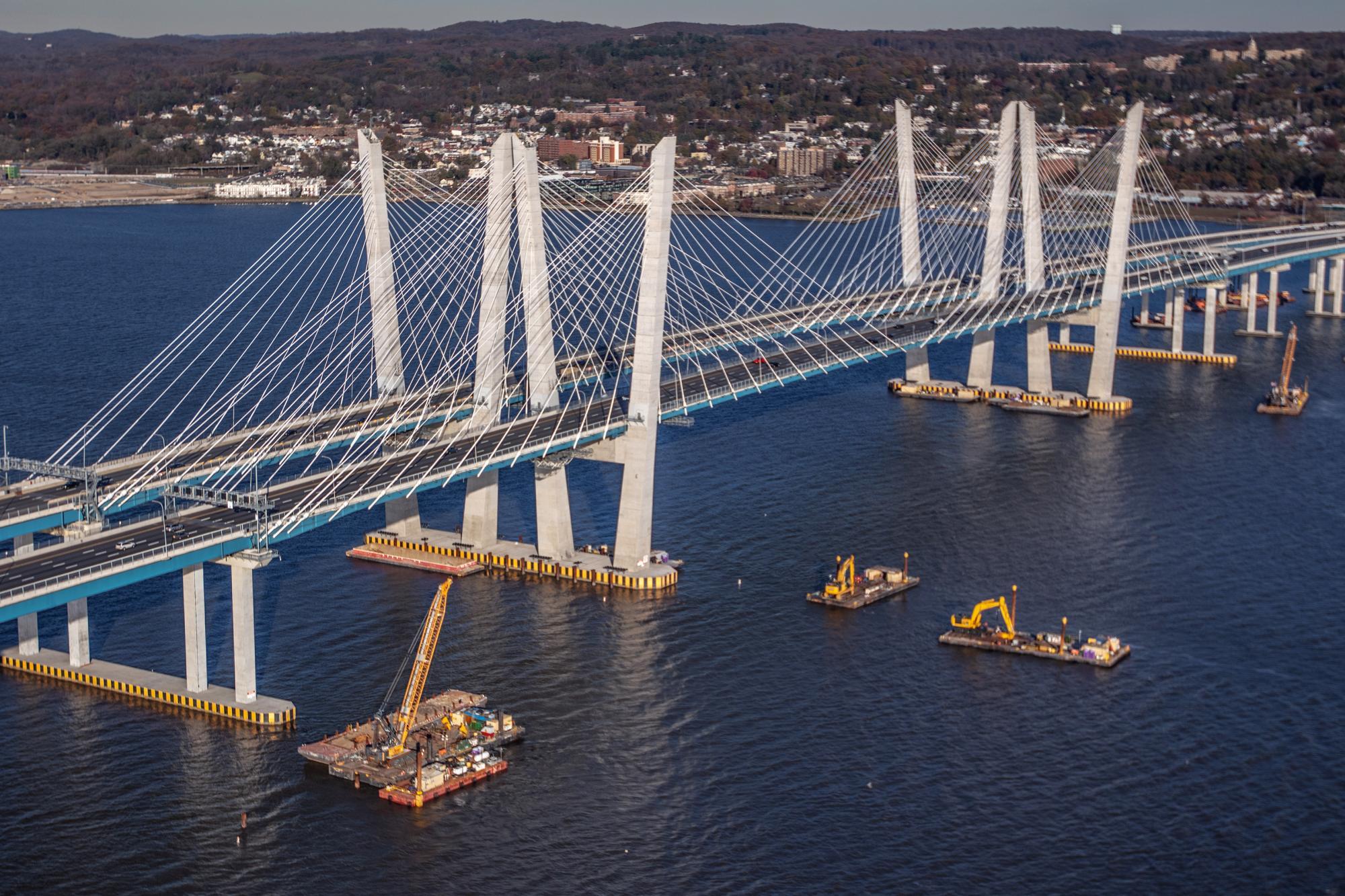 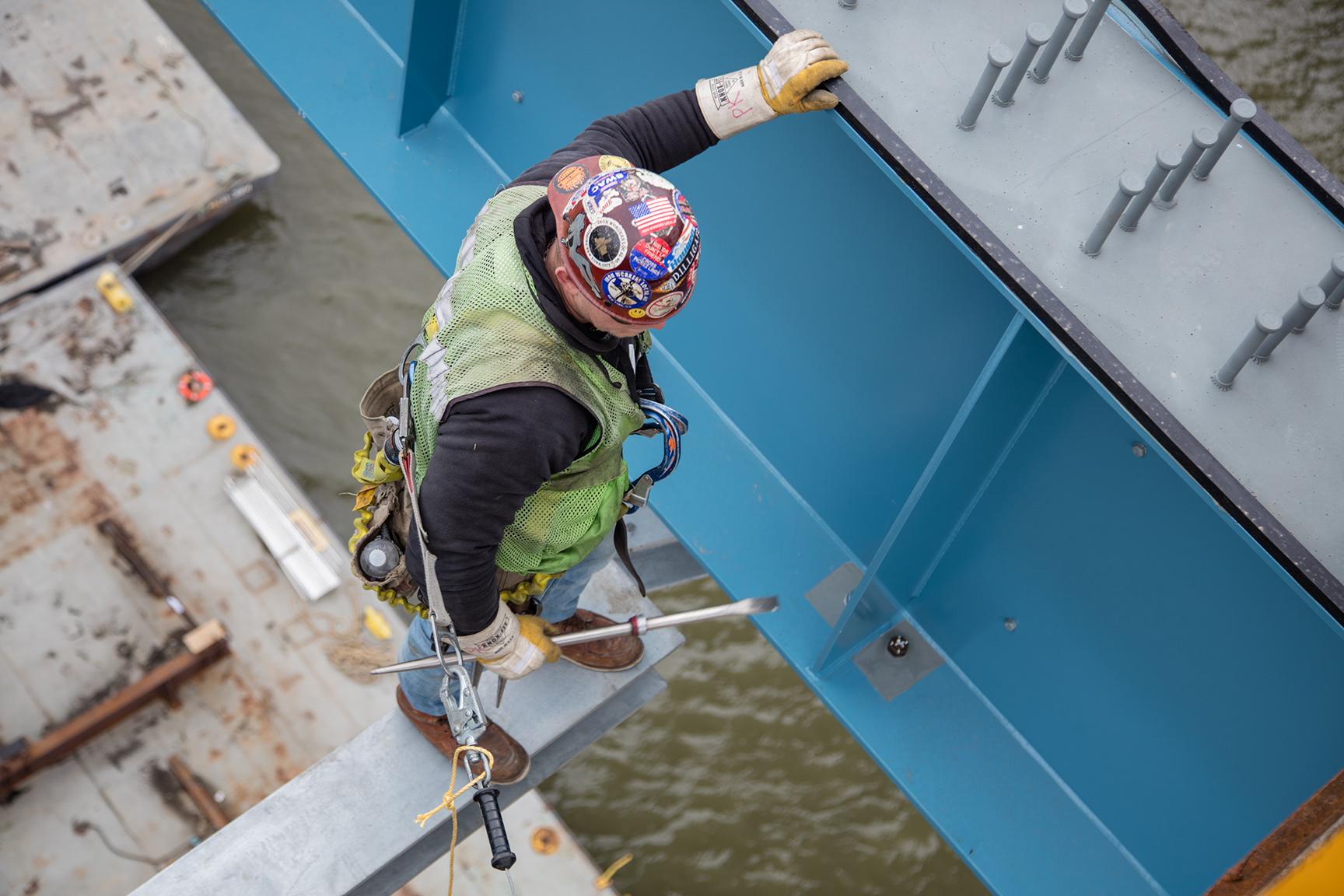 more than 300,000 cubic yards of concrete used on the project

Design-builder Tappan Zee Constructors (TZC) utilized modular construction to create large sections of the bridge’s foundations, roadway and superstructure on land. This allowed TZC to safely prepare massive segments of the bridge off-site ahead of time, with some steel sections measuring up to 410 feet in length.

Over the course of construction, more than 7,000 people worked on the project, both on- and off-site, totaling more than 13 million hours. More than 300,000 cubic yards of concrete used on the project - that’s enough concrete to build a sidewalk from the bridge to Key West, Florida. 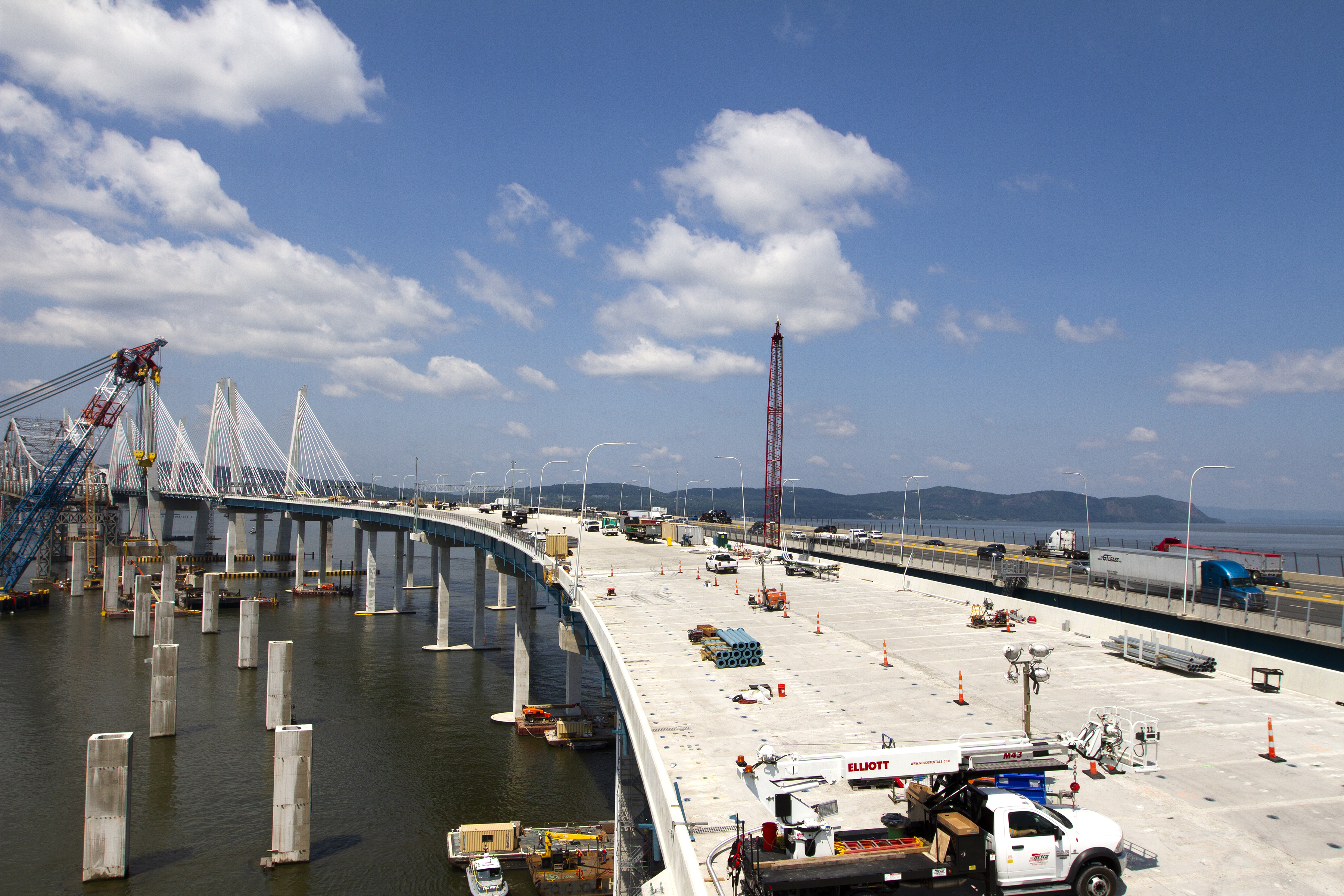 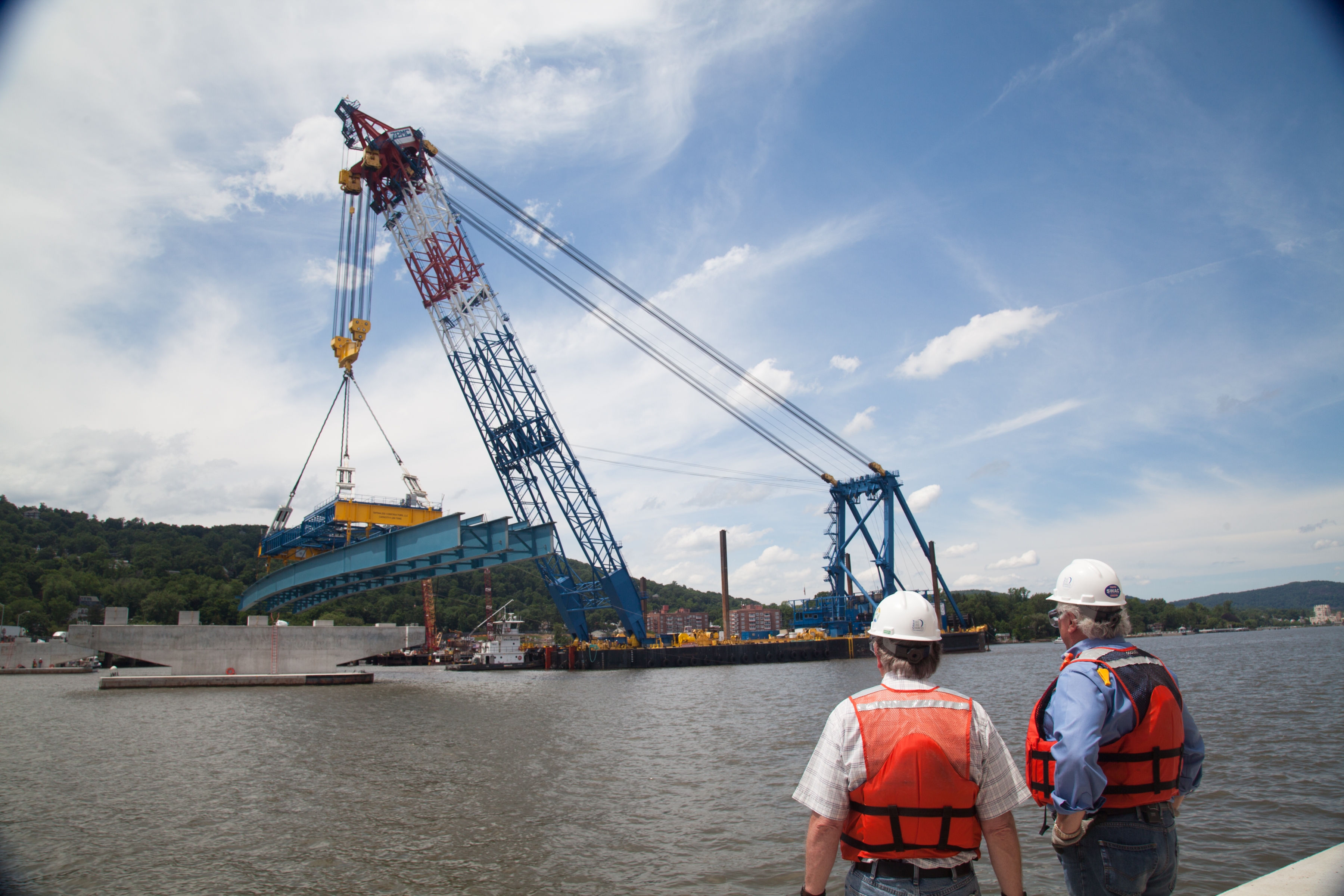 TZC was able to install these bridge elements thanks to its largest crane, dubbed I Lift NY. The enormous crane used a 328-foot lift arm, which is capable of raising up to 1,900 tons of material — the equivalent of 12 Statues of Liberty at once. The extraordinary lifting power of I Lift NY helped shorten construction time by months from original estimates and reduced project costs by millions of dollars. The crane also helped dismantle and recycle the old Tappan Zee Bridge.

Other innovative equipment included: TZC's mobile concrete batch plants, which supplied the majority of the structure's concrete directly on the river; self-climbing jump forms that rose along with construction efforts to create the iconic main span towers; protective bubble curtains used to absorb the energy produced during pile driving; and synchronized jacks used to lower the football-field-length foundations into the Hudson River. 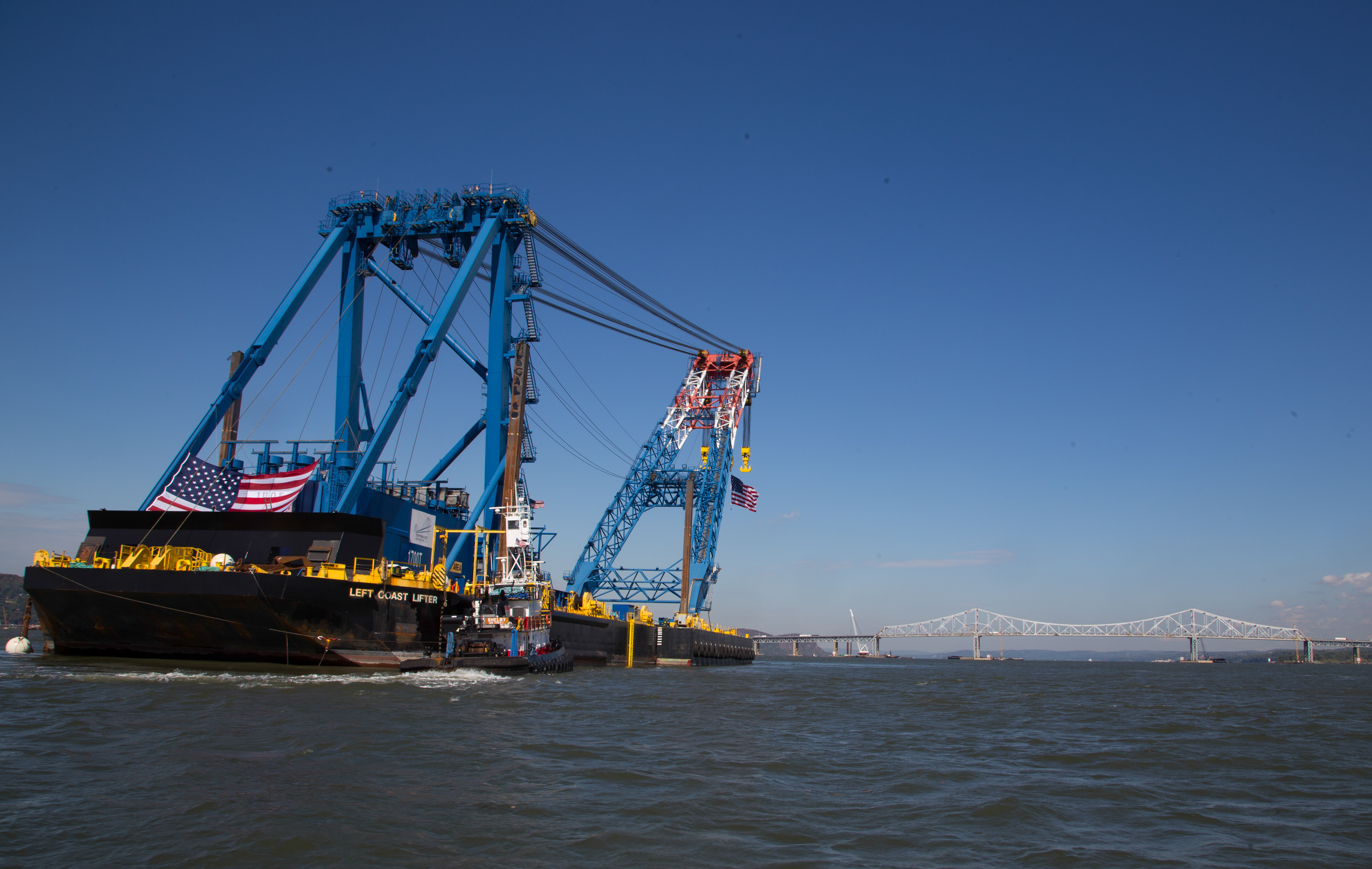 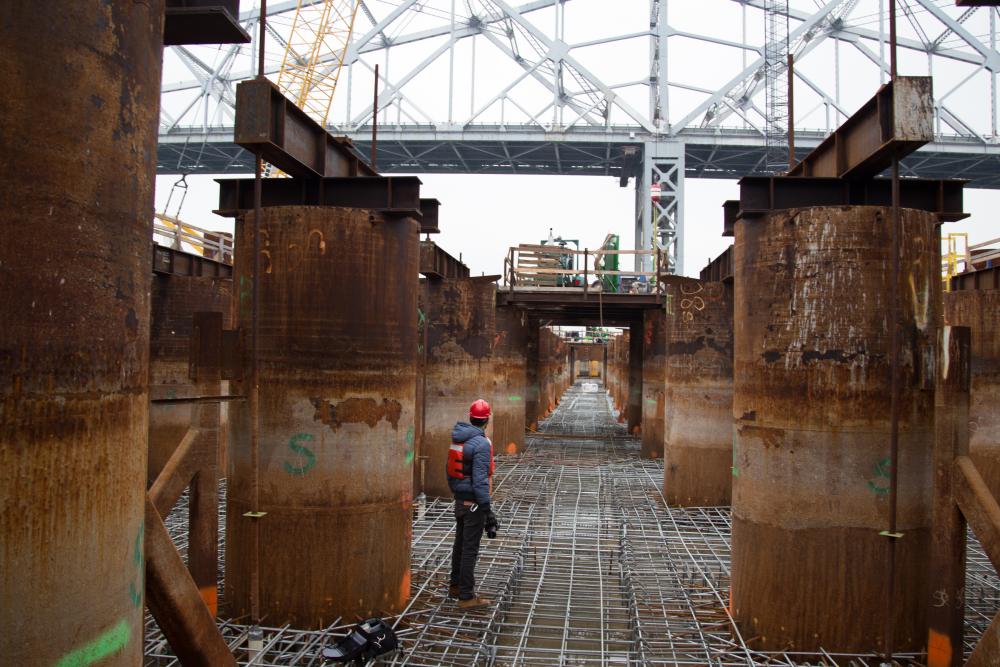 2014: A main span pile cap, with the Tappan Zee Bridge looming in the background. 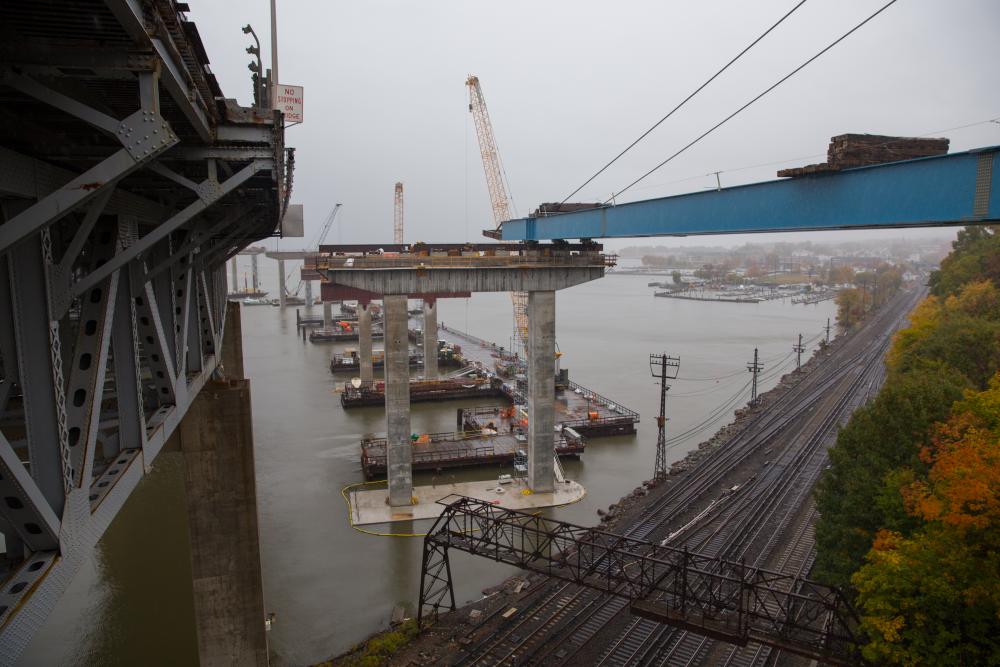 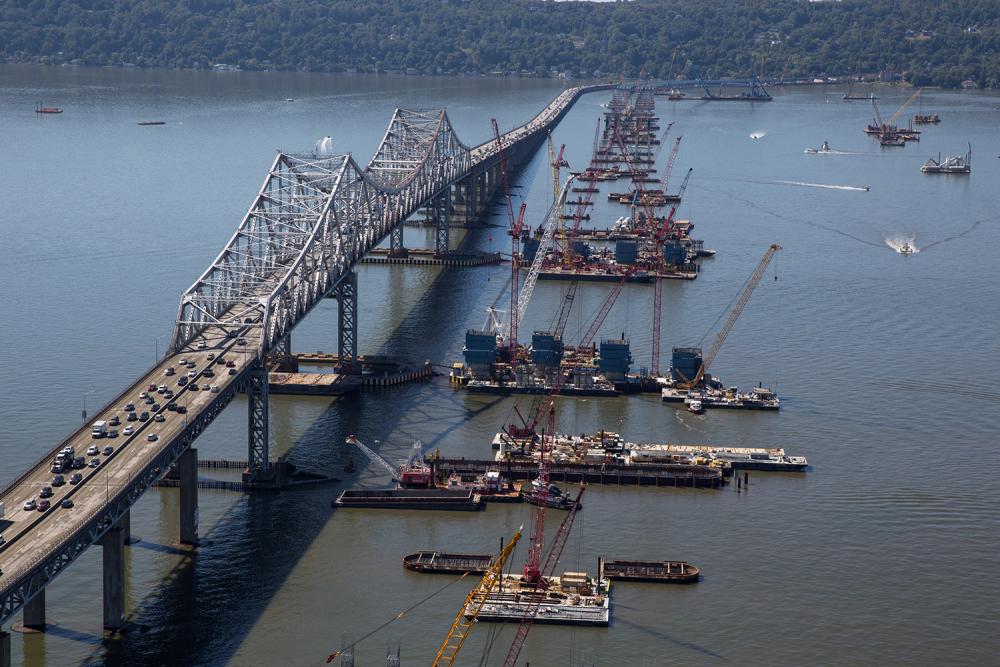 2015: At the height of construction, more than 50 cranes dotted the three-mile-long project site. 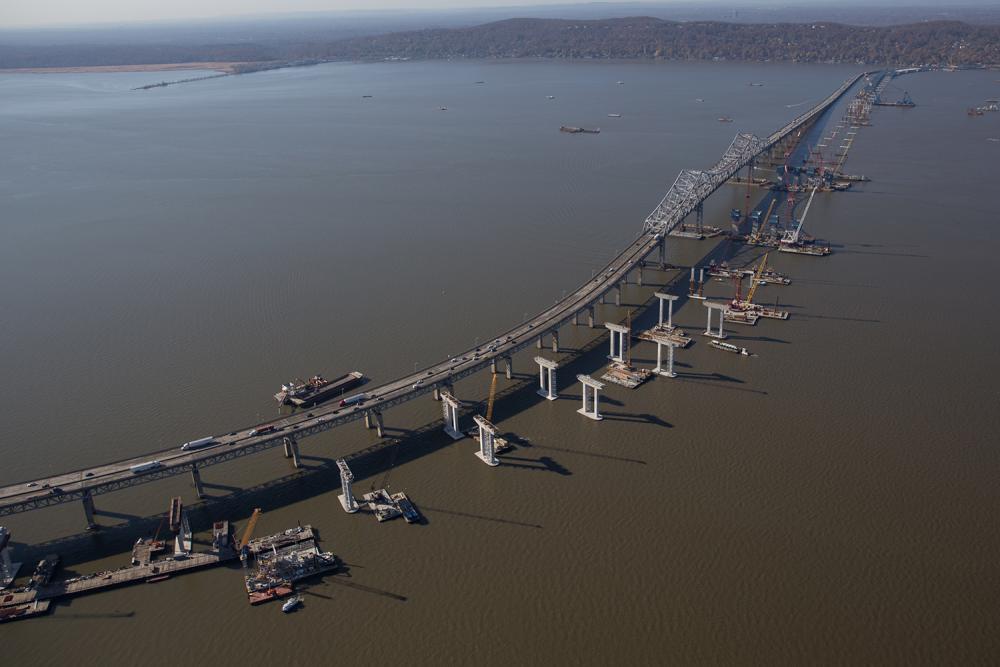 2015: Piers for the bridge’s Westchester approach. 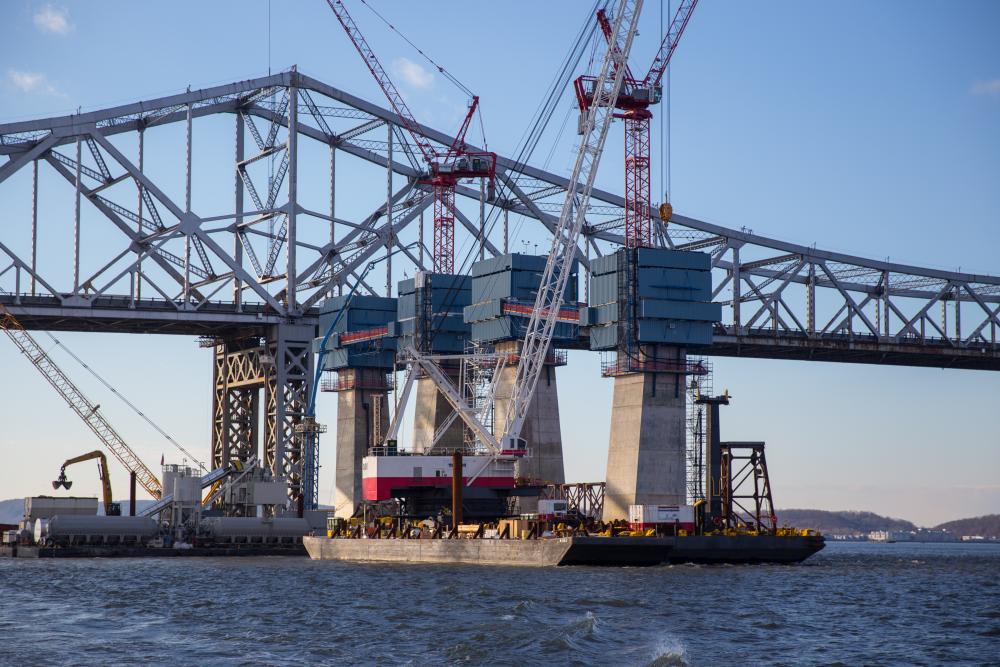 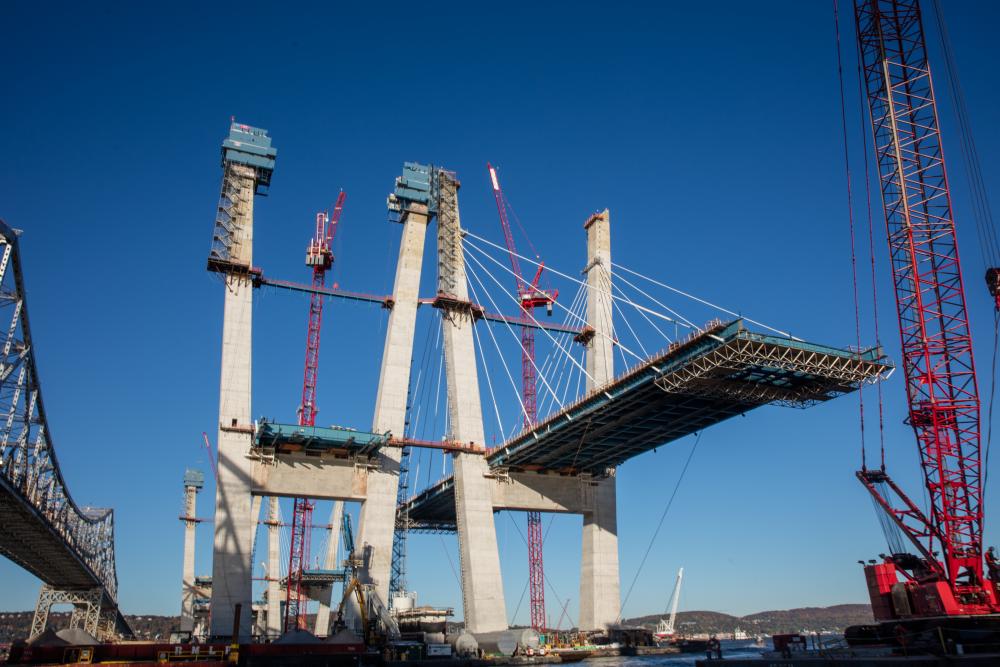 2016: The westbound main span roadway stretched out above the Hudson River.

2016: Temporary lights allowed for overnight work on the main span. 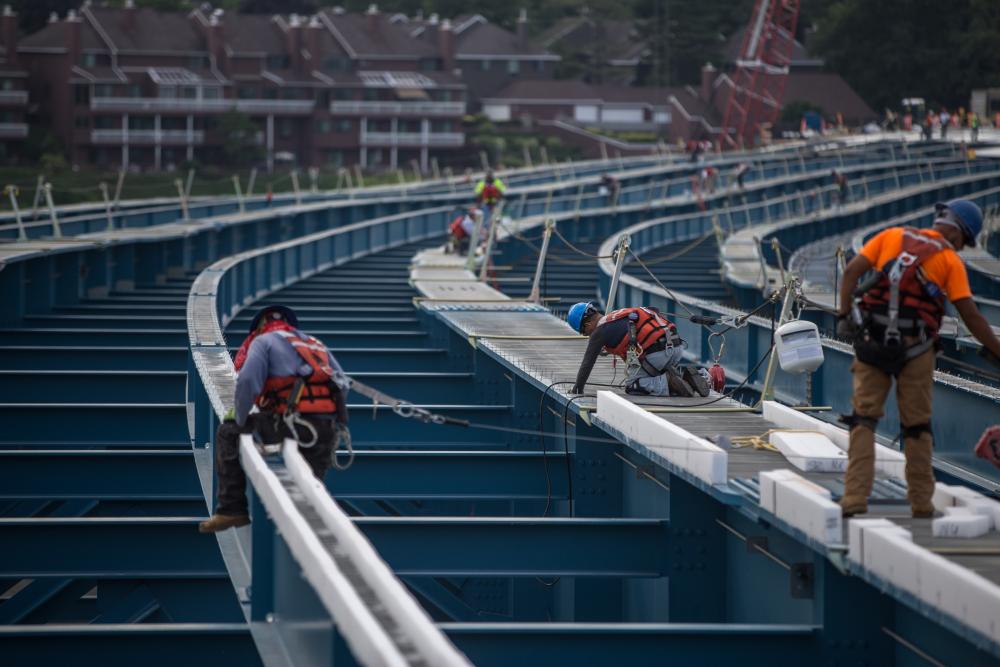 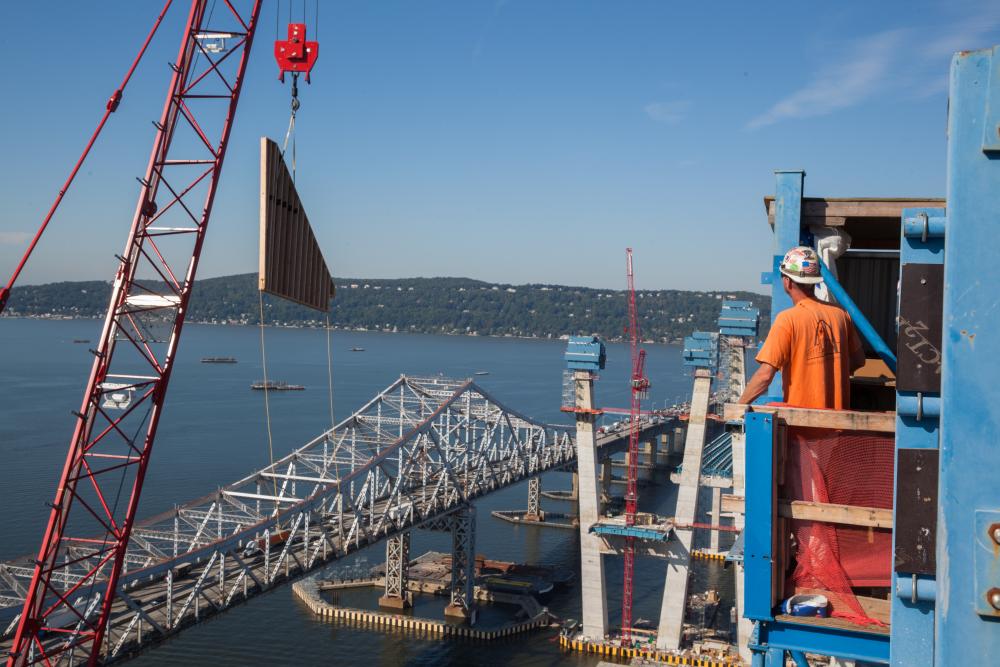 2016: A tower crane raised formwork for the top of a main span tower. 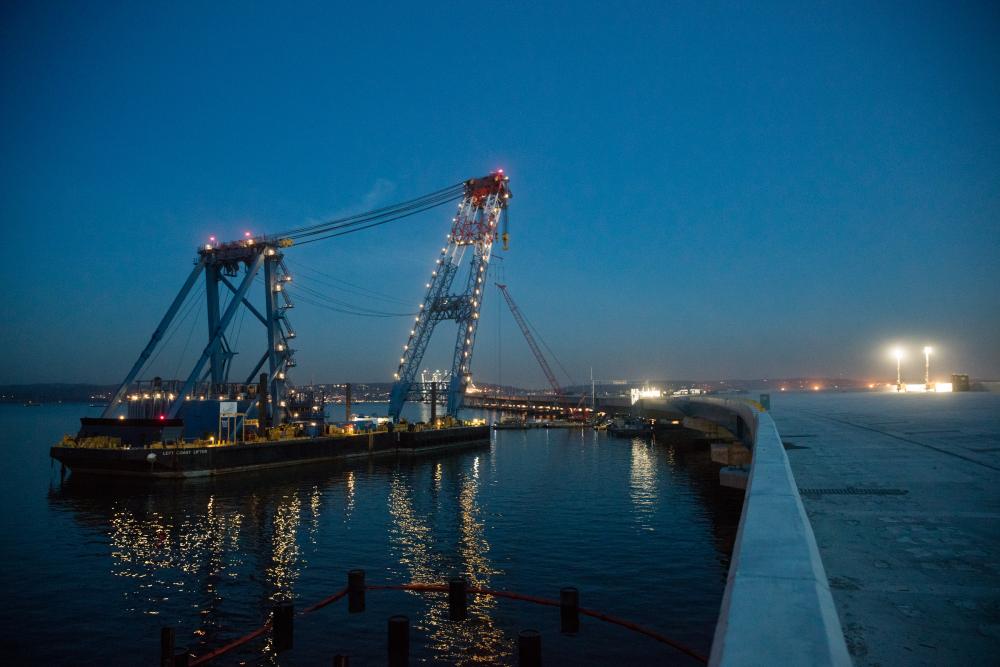 2016: The I Lift NY super crane conducted overnight operations on the Rockland approach. 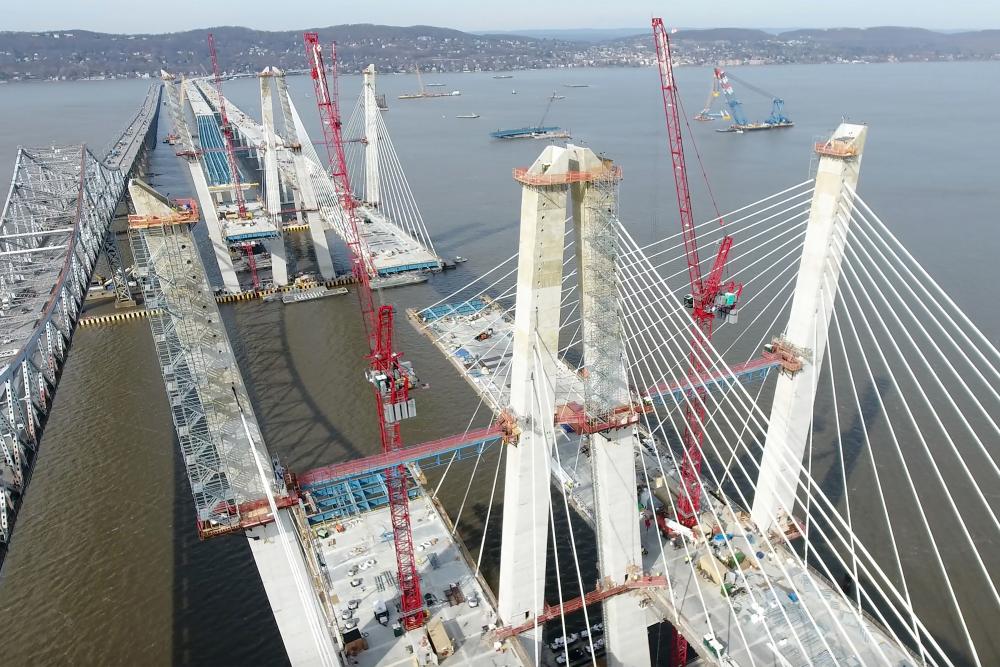 2017: Nearly 200 stay cables were installed on the bridge’s main span. 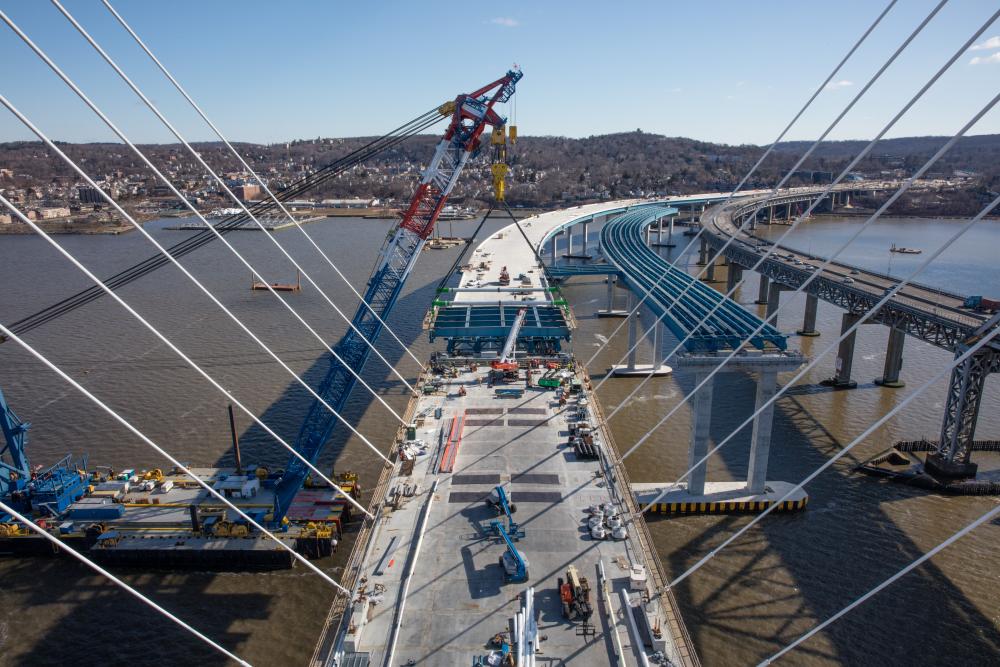 2017: The westbound bridge’s main span was connected to the Westchester approach. 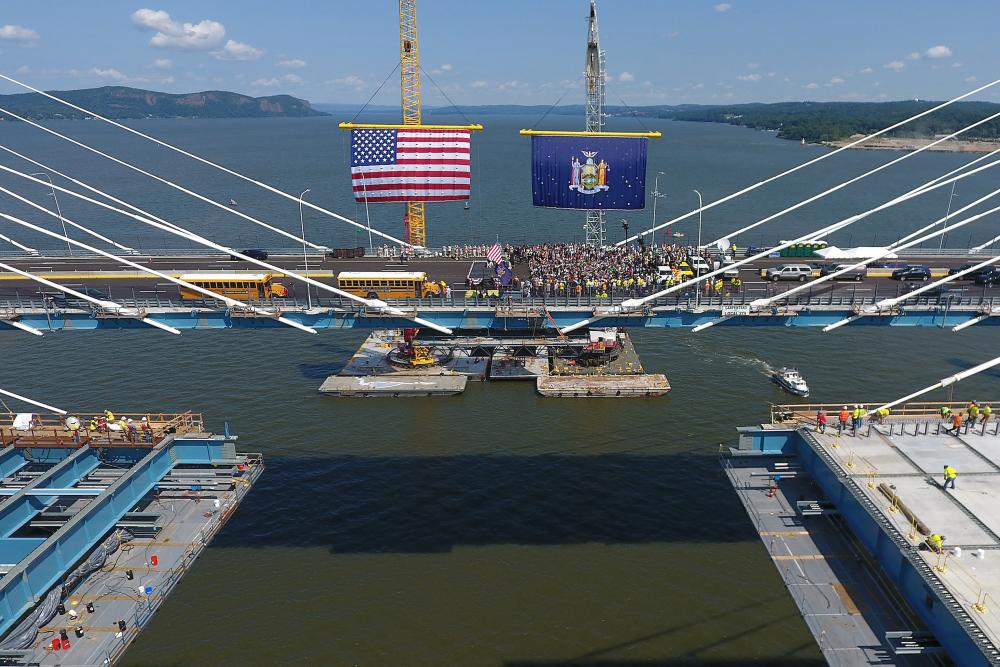 2017: A ribbon-cutting ceremony was held August 24 to celebrate the opening of the new bridge. 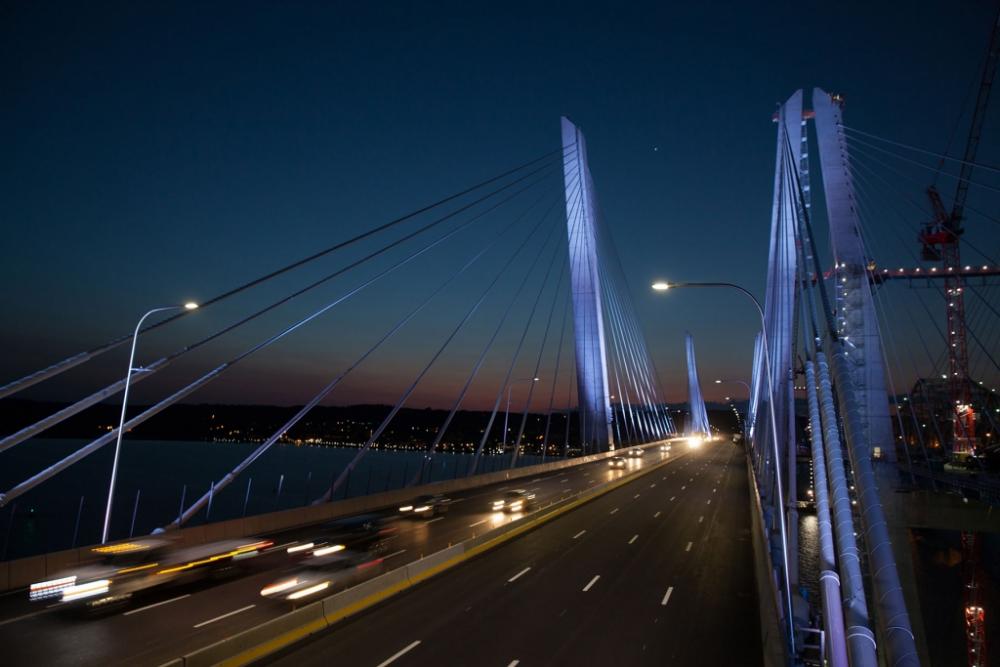 2017: On August 26, traffic crossed the new bridge for the first time. 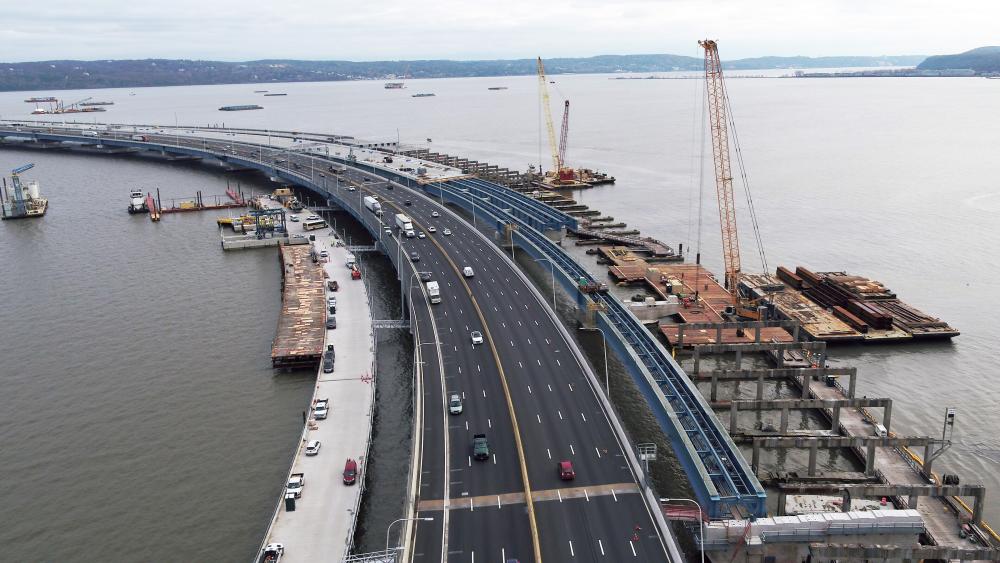 2017: The Tappan Zee Bridge needed to be removed in order to complete the eastbound span on the new bridge. 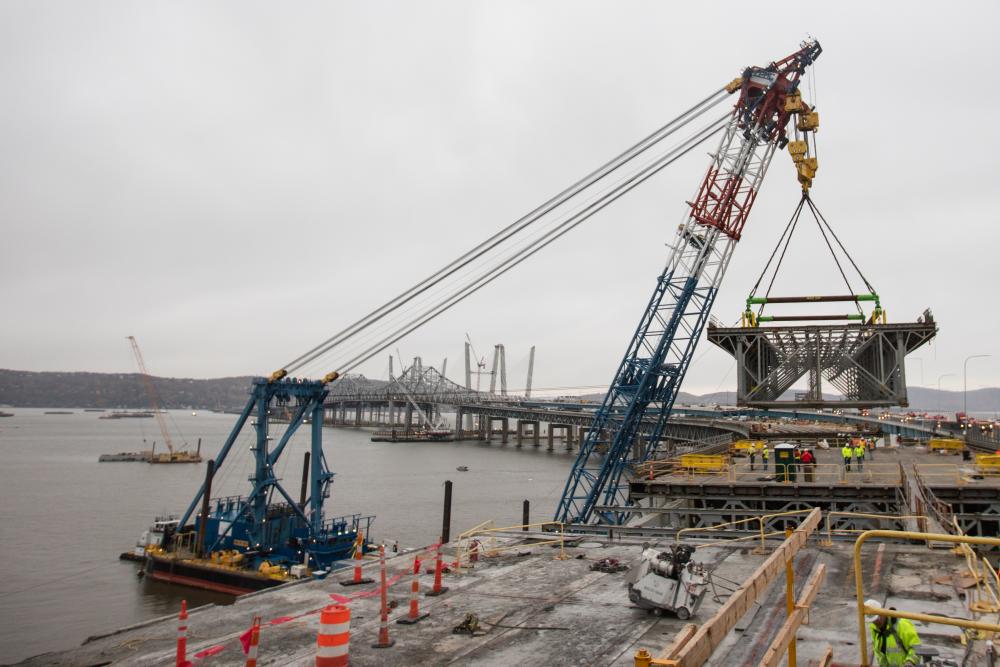 2017: The I Lift NY super crane removed large sections of the Tappan Zee Bridge near the Westchester shoreline. 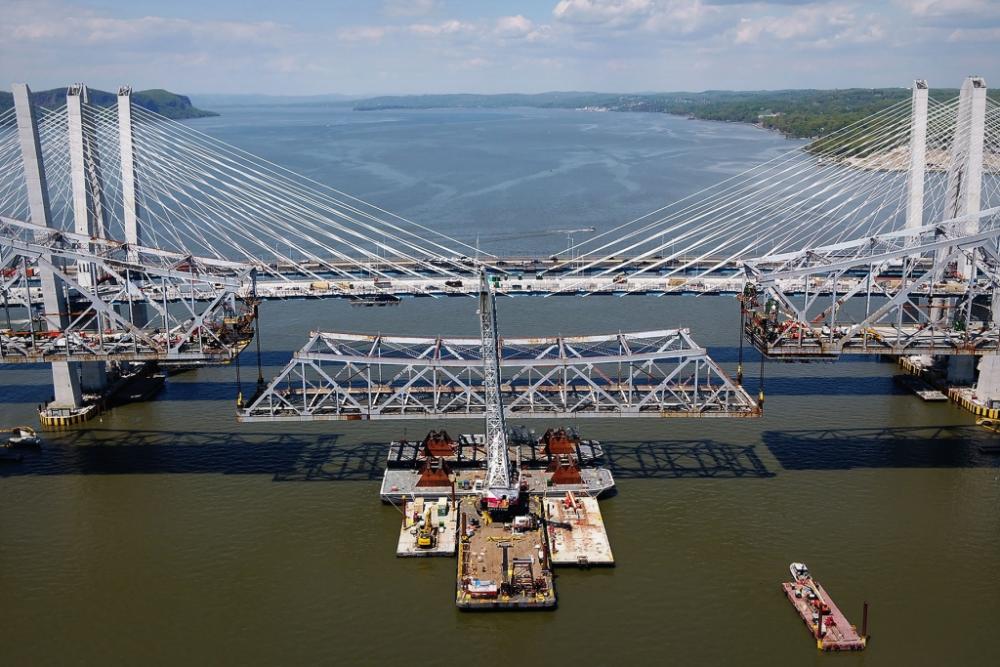 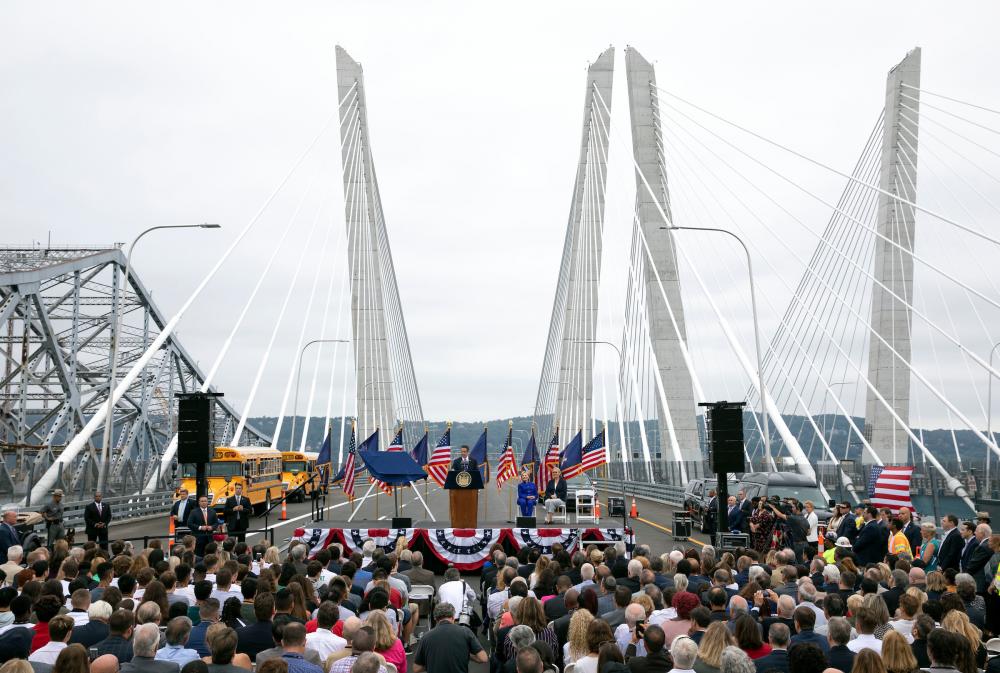 2018: On September 7, Governor Cuomo celebrated the grand opening of the eastbound span. 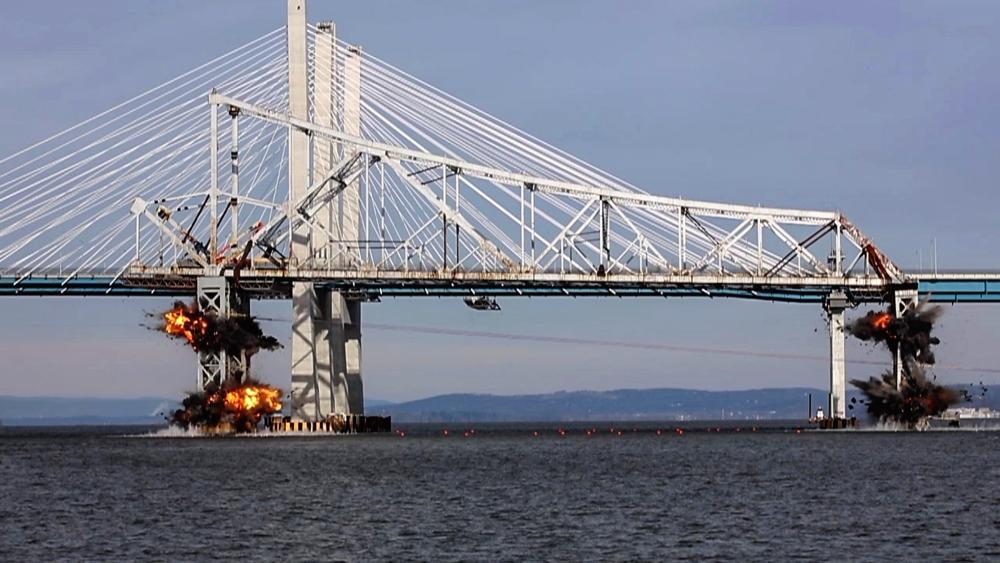 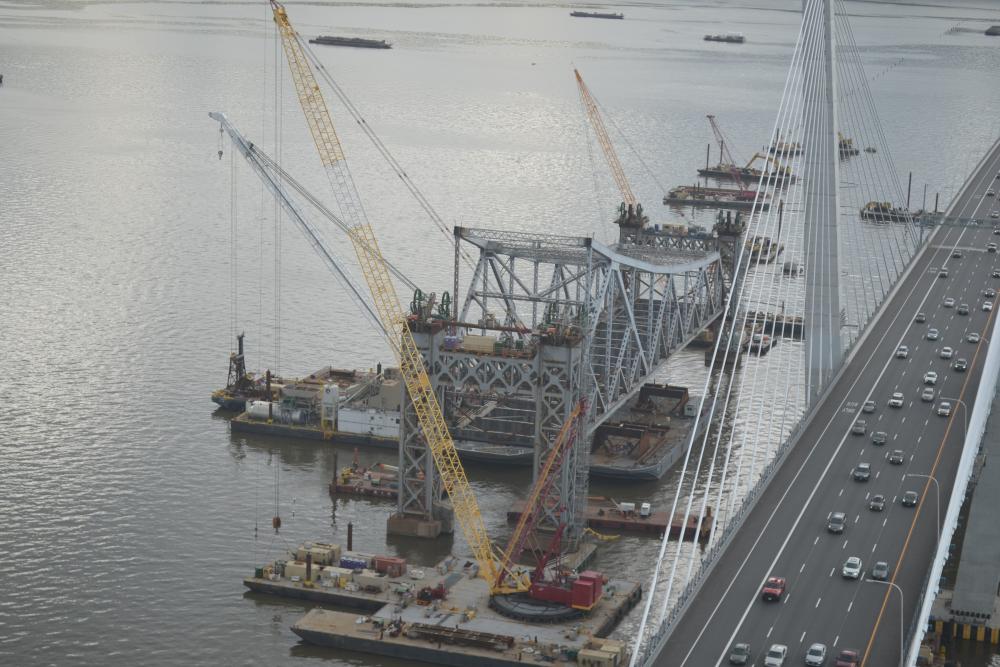 2019: The final steel section of the Tappan Zee Bridge was removed.

This page is available in other languages